74 replies to this topic

i quite like the rear lights but it does just look too much like all the other cars coming out at the moment, i also hate how the headlights are angular in shape but still smeared round one side of the bonnet, no front end character at all, though we should have seen that coming as soon as the mk5's headlights started creeping rearwards, it is literally like its face is being stretched back, cosmetic surgery facelift style [+o(] not impressed at all.

New modern design but just too bland and similar to everything else, new Citroen DS3 got more character than this has now!! the Mk4 was the last Golf to have a proper punching grille face, hence the obsession.

Its not that VW arent capable of producing some SEXY-looking cars in this modern era, as the new Scirocco R proved [In-love] imo, they are just playing it safe with these new designs which isnt a bad idea seeing as the Golf is the 3rd most popular car of all time!! Got to appeal to as many normal folk as possible and our enthusiast niche desires probably make up a lot less than 1% of the total demand for this car.

What VW seem to be forgetting with this design and the mk5, mk6 imo, is that the car has to be attention grabbing to stay in the public eye, and not just the GTI or R editions: if people dont notice you driving about in it, they are not gonna think of buying one, it just becomes like all the other new cars driving about- a mass of politically-correct aesthetics and eco-friendly rubbish. Where's the "pop"? wheres the charm? We shouldn't have to poor mods and bodykits onto their new design just to make it noticeable. The design elements should already be there, all we should have to do is accent them- which is exactly what we do with the Mk4's - all we do is lower it and put big alloys on to make the big flared arches a massivley noticeable feature - we didnt add the arches, they were already there! and the same applies to almost everything else we do to our Mk4's - tint the windows and smooth the boot to make the lovely boxish-yet-flowing lines jump out at you, colour code the rub strips and bumpers to make the lines flow all around the car, change tiny things on the front end to make the flat-face grille and lights really impact the viewer... all these things are ALREADY PART OF THE DESIGN, we just make them noticeable.

My point is where are the "hidden" design features on this new golf? where are the good bits for us to bring out? the flared arches are almost gone, the horrible angular shape of the front and rear clusters wrecks any flow of the lines on the sides of the car, the front bumper looks like a train wreck and i dont know what they were thinking when they decided to put a big crease line right across the boot lid...

The lines up the bonnet and maybe the sweep of the roof towards the rear are pretty much the only parts of this car i can see any point in attempting to accent, everything else is just beyond rescue imo. I mean, where would you start? You know the GTI and R is just going to have slightly different front and rear bumpers and better wheels, but the lines will still be the same = rubbish.

They need to strip it back, peel all this modern rubbish off the design, bring back the simple flowing lines and boxy design, sharpen up the corners again, stop making it so "nice". And, for God's sake, get them arches flared back out again!! Roll on the Mk8 I say, this one is just another recession-busting placebo to be swept under the rug as quickly as possible, just like the Mk6... I'm not the 'droid you're looking for.

I reckon this is because of the longer wheelbase and bonnet now higher than the wings.

Does anyone have pictures of the GT dashboard with the std 5.8" Discover Navigation System (DNS) ?

All the pics in the offical VW brochure show the larger and more expensive 8" PRO version.....

Not sure about the shiny piano black surrounds either...

Hideous. That is not a golf.

I'm not the 'droid you're looking for.

Hideous. That is not a golf.

looks like the new seat leon from the back. and from sides too

Heres another batch of photos, this time GT spec in White with a few extras. Looks quite a lot smarter IMO 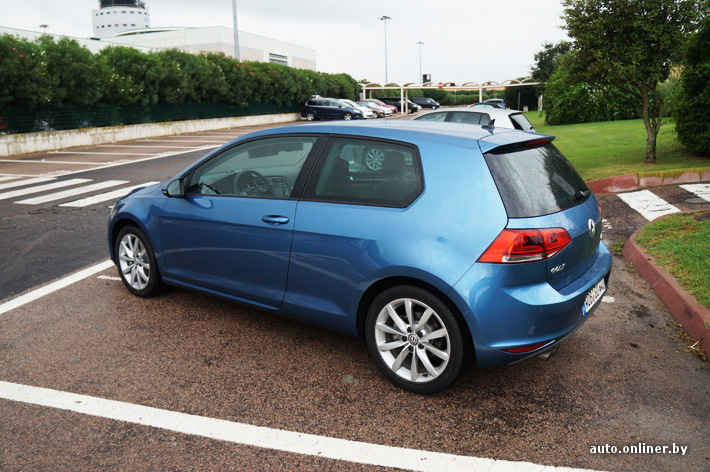 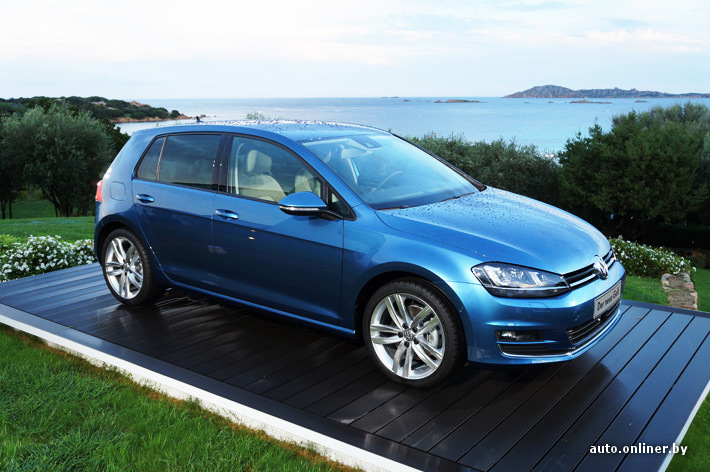 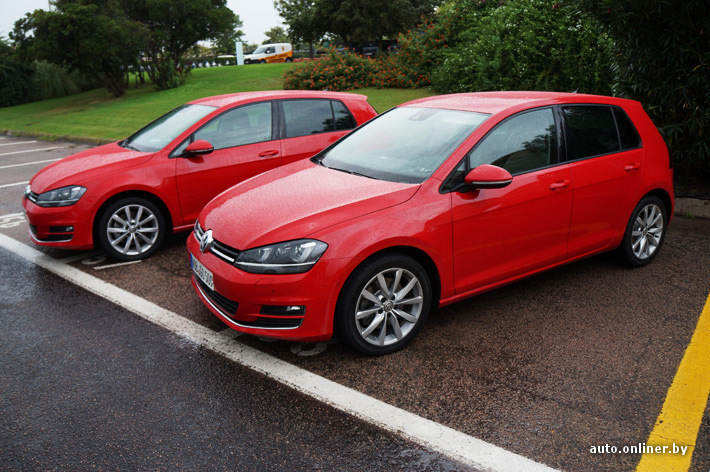 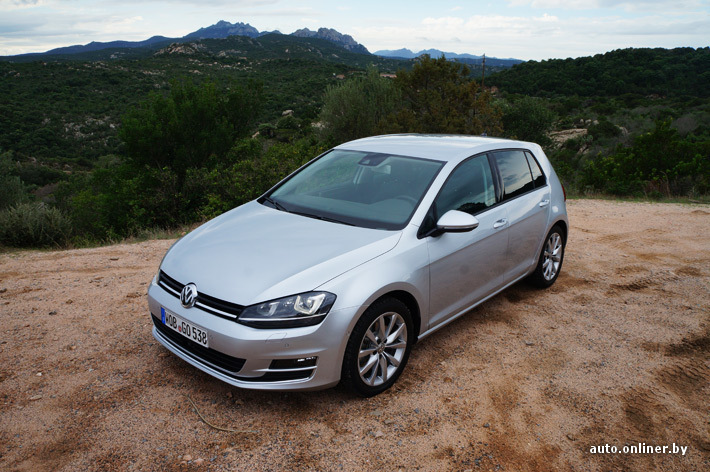 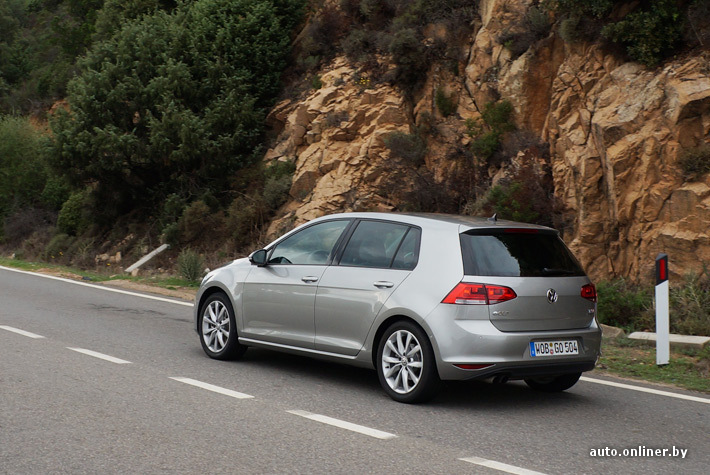 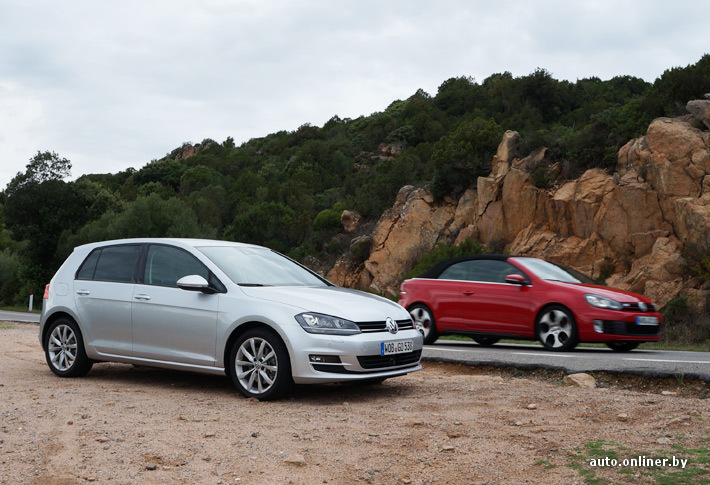 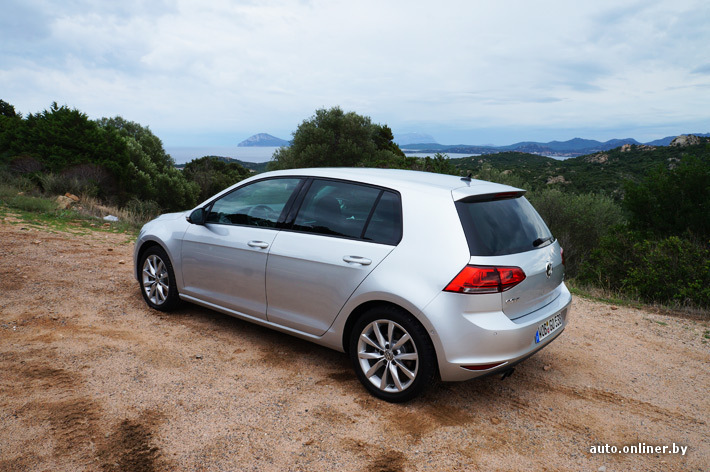 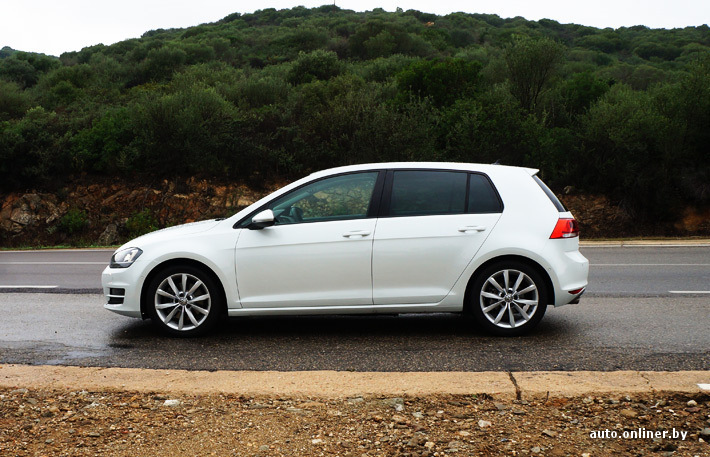 I think this one could definitely be a grower. The more pictures I see the more I can start to pick out mk4 characteristics.

Yeah just goes to show its quite a spec sensitive car!

I think this one could definitely be a grower. The more pictures I see the more I can start to pick out mk4 characteristics.

Agreed, they made a point during the PR that it is supposed to carry elements of the design from the MK4 (and MK2 surprisingly)

Yup, mixed in with a Seat maybe. Not sure what it is about modern Golfs, even the tricked out ones aren't especially appealing. I think the modern A3 is much better looking.

Is there an option for the twin spoke style 18s ? I prefer than to the ones on the uk configurator.

hmmm, the gt spec front end isnt too bad, but still too much audi styling in there for me, not enough VW.

Is there an option for the twin spoke style 18s ? I prefer than to the ones on the uk configurator.

Unsure, but go by what the price-list says as the configurator is still missing quite a few options.

I've seen it with my own eyeballs, sat in it even, I really like it! The interior is lovely... And it features the mk5 style boot handle: All pics by yours truly at the 2012 Paris Motor Show

OK, i admit the GTI is good looking. Love the red highlights, love the wheels, black roof and that front bumper is the best ive seen on this model yet, definitely goes a long way to giving the car some flowing lines.

Unfortunately, someone who ate a load of buttons at a party last night seems to have thrown up on the steering wheel.... other than that, i like the dashboard, love the "recessed" look of it (reminds me of mk4..), like the simple gauges, not sure about that ?tweeter? mounted behind some plastic mesh on the A-pillar though.

This car is definitely growing on me as we progress up the model tree, just need to see the R-spec now and i should be happy.

My preferred model because of price consideration is the 1.4TSI but the interior with at garish metal finish is very unwelcome. Lets hope they make the alternative GT trim on the doors and dash an optional extra, although very much doubt that.

I'll wait until I see it in the flesh before ruling it out in which case I will have to look at other makes of car, now.

Hmm, that interior does look pretty damn nice to me - true about the steering wheel buttons, but I guess you'll get used to them. Really do not want the next car to be yet another black (3rd in a row so far) - really liking that blue one pictured earlier, though also liking white but it would never be clean with the mileage I do.

The more I look at it the more I start to like it well the GT, I swear someone posted a picture of the R model on my Facebook earlier will do see if I can find it now!

So went to VW today the GTI with be out in 3 months according to the guy I was speaking to and the R will be around next December and is still to be revealed. Had a look at a few too and the GT at the moment is the only viable option!

Told y'all it would look good [

Back to MkVII (MK7) Golf and Jetta